10 Secret Places in Switzerland for Adventurers

Only for insane people!!

What was once the Waldau Insane Asylum is now a small museum displaying the history of psychiatric care. 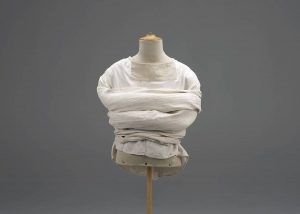 In the museum, you will discover how psychiatric patients were treated in the past. You will leave the museum with a pretty clear idea of how madness looks like. One of the craziest methods used was the “Centrifuge Therapy.” 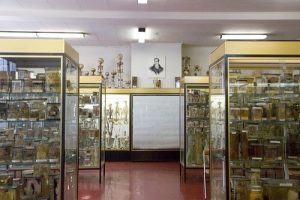 This therapy was used in the 18th century. Smart minds of the time made a flawless logical consideration: “Psychiatric patients walk around like they are lost, confused as if their mind is spinning. If we spin the world with them, we can align the confused brain to the outside world, and the patient is healed”. Ain’t no need to explain that the patients were behaving calmer afterward for nausea and confusion, sometimes even unconsciousness. (Some doctors also believed mental illness was due to congested blood in the brain, and that the spinning dispersed the clotted blood).

Furthermore, the Museum displays Brains and other body parts in plain sight. There is a lot to discover in this place, but only a real adventurer will have the guts to access this creepy place!

A secret spooky room of sculls 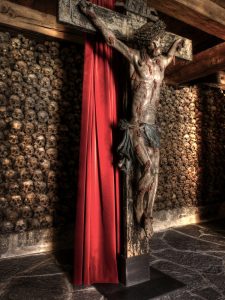 When a 600 years old church has a hidden underground room, you better

Leuk is a quiet place in Switzerland most people have never even heard about. Elderly people like to enjoy the SPA of the village and listen to the silent vibes of the city. It is furthermore an ancient city with an equally old church that has been torn down and reconstructed many times over the centuries. 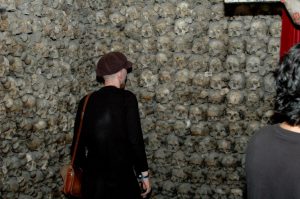 For many centuries the church was hiding a creepy cellar for of sculls. The room is 3 meters tall and 20 meters long, covered by sculls wherever the eye can reach. It was discovered in 1981 when the small community wanted to build a house on the grounds. A quick scan of the underground floor revealed the presence of the hidden chamber.

The archeological excavations revealed that the skulls date back to the 13th – 16th century, the timeframe in which the church was built. The chamber was then sealed, only to be reopened in the 20th century. The chamber also preserved a little statue and a well-preserved painting stating “What you are, we once were. What we are, you will become”. 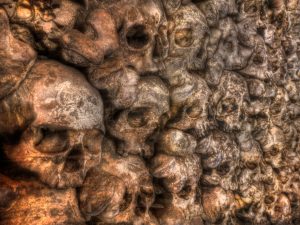 By now, we still don’t know the reason of this cellar. The statue of Jesus crucified serves as a guardian from evil. But it seems like the skulls ended up in this cellar for the simple reason, that the cemetery was full. When moving the old skeletons, locals preferred storing their skulls in a room, rather than eliminating them.

A view on stars and mountain peaks 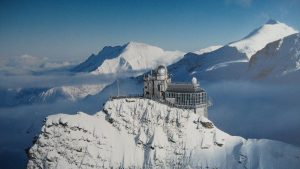 Men and women of science have long gone the extra mile to make the new discovery. In Switzerland, they have brought telescopes and other advanced equipment to the peak of a mountain. And built a whole laboratory with living facilities connected to it.

When the Jungfraujoch station in Switzerland’s Bernese Alps opened in 1912, it became the highest railway stop in all of Europe. It also opened the door for eager scientists awaiting easy access to a high altitude site to do their work. 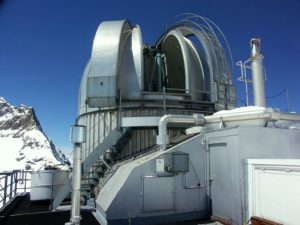 When the observatory was completed in 1937, it was the highest building in the world, attracting not only scientists, but also some curious hiker. 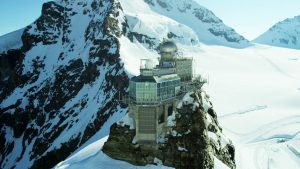 With multiple laboratories, a weather observation station, astronomical and meteorological domes, and a 76-cm telescope, the Sphinx has served as a headquarters for researchers in fields such as glaciology, medicine, cosmic ray physics, and astronomy. And over the years, the building has adapted to meet scientists’ needs. Today, the observatory is fully outfitted with electricity, water, telephone, internet, and even a machine to produce liquid air.

Add this to the fantastic view an explorer can enjoy from this peak, down nearly 3000 meters to the next valley, and you understand why this place is a must-see! 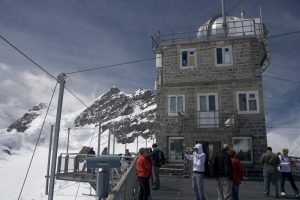 Not only is the structure incredible, the view fantastic, but as so often, even the journey will delight you. Driving through the high mountains, past ice sculptures and castles is indeed a wonderful trip. A fantastically awesome place that couldn’t miss in the top 10 Secret Places in Switzerland for Adventurers. 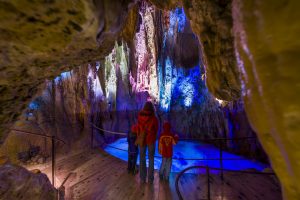 Caves are per se a place for adventurers. But Höllgrotten Caves are a way in front of so many other dark caves. They are in fact illuminated by bright, colorful lights, making anyone’s imagination play games. 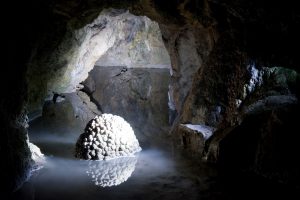 The cave is a safe place to be in, thanks to the path constructed and the security guidelines displayed. 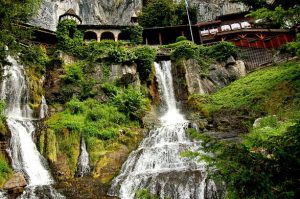 What is cooler than a cave with a legend? The legend that made the cave cool, of course! St. Beatus Cave gets its name from a monk who decided to find peace for his thought and meditations in this isolated, silent place. To his misfortune, a dragon was already living in the cave. Its laser blazing eyes were a terrifying weapon, most people would have preferred to run away from. Not so did St. Beatus, who instead raised his cross necklace in faith, chasing the dragon out of the cave in panic, who fell into the lake Thun below, causing the water to boil.

Caves are per se an adventure. But when it comes to the St. Beatus cave, there is so much more that comes together for an unforgettable day. First of all, the path to reach it is simply marvelous. A hike through the Swiss forest, jumping over bridges and stones. When reaching the cave entrance, you will enjoy a rare sight of an underground waterfall spitting out from the rocks, a Lord of the Rings Elf-like construction, and the access to an only partially explorable cave. 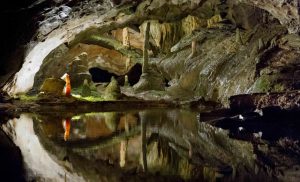 In the cave, you will enjoy beautiful stalagmites and stalactites, underground waterfalls and lakes, and the echo of your own voice. A small museum right outside the exit shows the bear skeletons found inside the cave. An unmissable place for the top 10 Secret Places in Switzerland for Adventurers.

The bridge only courageous people dare to cross 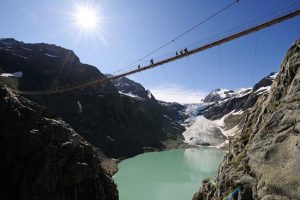 Imagine a terribly long suspended bridge over a glacier. Imagine, the bridge looks like it will crash any moment (but it won’t). Imagine the wind blowing on it and shaking it. Welcome to the Trift Bridge!

Trift Bridge was first constructed in 2004 for workers of the Trift hydroelectric plant to access the power plant. The bridge was then enforced with steel wires and is now part of the tracking tour. What makes this bridge so scary, are the nearly 200 meters of air under your feet, and the fact that a wind bows happy swifts by from time to time. Shaking the bridge and anyone on it. 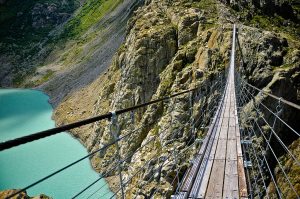 To reach the bridge itself, you will need to get a cableway to bring you on the path to the Trift beige. A scary adventure for brave people that clearly had to be in the top 10 Secret Places in Switzerland for Adventurers.

A hike, view and experience for real outdoor lovers 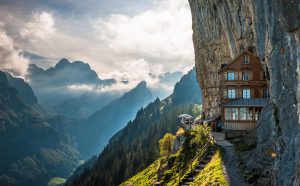 A guesthouse build into a cliff? With farm animals? And with a great view? If it sounds to good to be true, visit Berghaus Aescher!!

The guesthouse was built in 1940 as a farmhouse. Today it still has animals, but tourism is the primary income. To reach it, a nice hike is necessary, making it a fine place to be. A reward after your hard work. 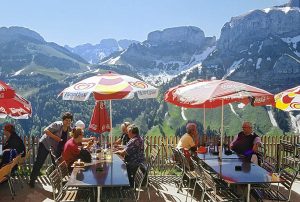 Open from May through November, the guesthouse uses only rainwater, and there are no showers. Weekends often bring in rowdy groups of Swiss hikers and live music that plays late into the night. It’s run by Claudia and Beny Knechtle-Wyss and their five children, plus it’s home to 35 sheep, 20 rabbits, 5 chickens, 3 pigs, a donkey, and a dog.

The guesthouse is located near caves where rests of Neanderthalers were found, dating back 40.000 years.

The prison that turned into a hotel 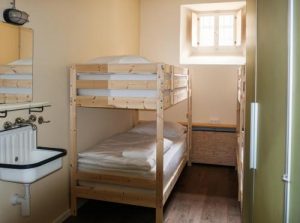 A prison is not the place you want to check-in, usually. But for logistical reasons, prison makes a hell of a good a hotel. This is what the city of Lucerne must have thought when they decided to transform the former prison into a hotel, you can check-in at.

The building was a prison for over 100 years, but was transformed from prison to hotel after just one year. Many particulars remain, even though every cell has a toilet now. 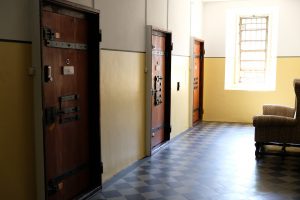 Funny enough, the hotel offers various room options, from single cells to the suite, where the director of the prison used to live. The iron bars on the window remain, and the heavy cellar doors will still close with the same old creepy and heavy sound!

Ever dreamed of reaching the sky with an elevator? Welcome to the Hammetschwant elevator, the tallest outdoor lift in Europe, which shoots passengers from an underground boarding station into an open-air shaft leading to the top of the mountain in less than a minute.

The elevator brings you to 1300 meters from the lake of Lucerne and promises an incredible view over the whole landscape. 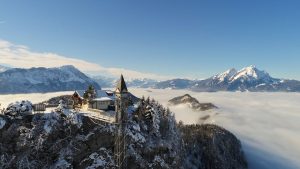 The original elevator was build of wood and was a quite questionable structure. Today’s structure, strong of steal, is a much safer ride to the top of the hill. You will still feel a little bit surprised by how exposed the whole structure is. 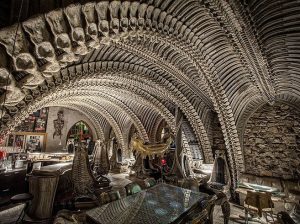 When a medieval city of the 13th century happens to have a crazy fantastic mind that loves to mix macabre with pop art, this is the outcome. 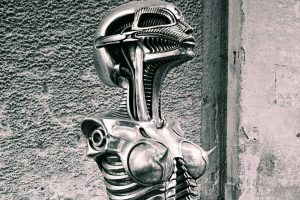 Even if the name H. R. Giger doesn’t mean anything to you, you might know his famous creation “Alien”. The monstrous creature that kills without mercy. Well, he loved his creature quite a lot, so to put it recurrently in its museum, where more pop culture of his creation meets his monsters. 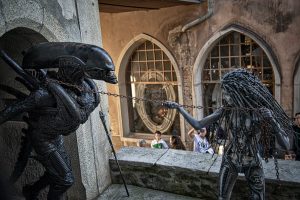 The Museum’s interior was designed entirely by Giger himself. The Museum is intentionally dark, grim, and slightly disturbing: stepping inside feels like entering an alien’s lair. His oeuvre is available for view, including paintings, drawings, even furniture. The disparity between bucolic Switzerland and the obsessive, bizarre works of Giger will lend a Surreal tint to a day spent in Gruyères. 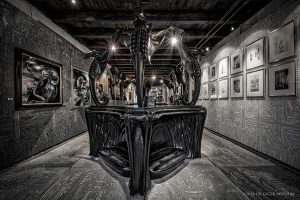 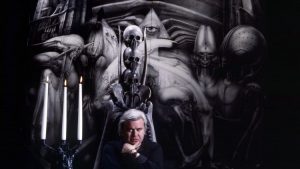 A beautiful panoramic photo of the museum can be seen on the museum’s website. The N.1 thing to do, if you are looking for an adventure in Switzerland is absolutely this grim, unmatchable museum.

Finally, if you are an adventurer and you like Switzerland, you will love our Swiss backpacks, made for outdoors and fun. The multifunctional pockets, ergonomic shoulder straps, attention for details, and years of experience and experiments, ensure you the best practical outdoor experience. Don’t miss the limited opportunity to get them with 35% discount till the end of the month! Visit our website www.swissruigor.com

Jetzt sparen
Are you going to leave and miss 35%?

Become a SWISS RUIGOR Insider and benefit from great promotions: Get 35% discount on not reduced backpacks and bags!

All you have to do is fill out this form.

Save the coupon now
In case you want to change your privacy settings (e.g. issue consent or revoke an already issued consent) please click on the button below. Settings